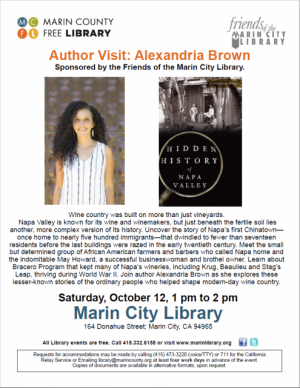 Wine country was built on more than just vineyards.

Napa Valley is known for its wine and winemakers, but just beneath the fertile soil lies another, more complex version of its history. Uncover the story of Napa’s first Chinatown—once home to nearly five hundred immigrants—that dwindled to fewer than seventeen residents before the last buildings were razed in the early twentieth century. Meet the small but determined group of African American farmers and barbers who called Napa home and the indomitable May Howard, a successful businesswoman and brothel owner. Learn about Bracero Program that kept many of Napa’s wineries, including Krug, Beaulieu and Stag’s Leap, thriving during World War II.

Join author Alexandria Brown as she explores these lesser-known stories of the ordinary people who helped shape modern-day wine country.