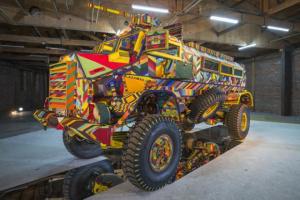 The San Francisco Tribal & Textile Art Show, is one of the most important tribal art fairs in the world. Known for showcasing exceptional tribal artwork and textiles, including many rare and unique pieces from Africa, Asia, Australia, Oceania, and the Americas, the fair will feature top-tier galleries and dealers from the United States and around the globe, as well as special exhibitions: Artist The Casspir Project and The Fantastic Geometry of Flat Weaves from around the World.

For the first time in Northern California, Artist Ralph Ziman’s traveling exhibition, The Casspir Project, and the presentation of SPOEK 1, an 11-ton decommissioned, apartheid-era Casspir vehicle that has been restored and reclaimed, will be on public display.  SPOEK 1 was completed in collaboration with artisans from Zimbabwe and the Mpumalanga province of South Africa, who used 70 million brightly colored glass beads to turn the symbol of tyranny into a spectacularly adorned sculpture that represents humanity and creativity.

Ziman is known for his work that interrogates human rights issues such as apartheid, the over-militarization of police, and state violence. SPOEK 1 is the central part of Ziman’s The Casspir Project series, which also comprises installation, photography and film. SPOEK 1 will be showcased alongside significant textile and indigenous works from artisans in Africa, Asia, Indonesia, Oceania and North America.

Also, on display, and curated by collector Peter Pap, will be an exhibition called The Fantastic Geometry of Flat Weaves from around the World and will include over 100 antique pieces from the Americas to Central Asia and beyond. This is one of the largest collections of antique flat weaves in the country, with many of the pieces on public display for the first time. There will be exquisite horse covers from Persia, kilns from Turkey and Central Asia.  Navajo flat woven rugs and pieces from Afghanistan will also be showstoppers. It is not to be missed and many of the pieces are on offer.

The American Indian Art Show, usually held the preceding weekend in Marin, will take place concurrently at Fort Mason under the same roof, giving show goers the opportunity to see both major shows over one weekend.

In addition to the important special exhibits, the San Francisco Tribal & Textile Art Show features work that ranges from the finest textiles and rugs from Africa, Asia, and North America, and remarkable carvings and objects from Indonesia and Oceania as well as beautiful contemporary materials from around the world.

The San Francisco Tribal & Textile Art Show is produced by Objects of Art Shows, the American West’s premier fine art and antiques event producers, led by Kim Martindale and John Morris, who have been presenting important art events in the region since 1996.