Back to top
Home | Calendar | Alicia Amerson: “My Address Like My Wings Travel With Me: Drone Stewardship to Protect Marine Life”

Alicia Amerson: “My Address Like My Wings Travel With Me: Drone Stewardship to Protect Marine Life” 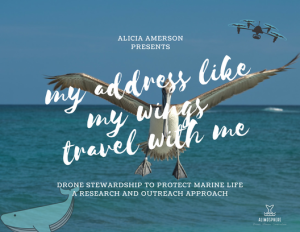 ACS San Francisco Bay Chapter presents founder of Alimosphere, Alicia Amerson’s “My Address Like My Wings Travel With Me,” a discussion on drone stewardship to reduce wildlife disturbance. This event is open to the public and free of charge. Donations are greatly appreciated and will support cetacean research and education programs.

Drones are known to cause disturbance to wildlife. Our California coastline is home to a large biodiverse group of species from sea birds to pinnipeds. Some species of marine wildlife are adapting to the ever changing coastline and managing to survive alongside the increase of human activities in these wildspaces. Drones can be purchased easily and flown without a license. Currently, we don’t know the number of drones that are flown on the coast every day in California, but we do know it is increasing. Industry projections show that at least 7 Million drones will be in the sky by 2020. Human impacts (hiking, biking, kayaking, photography, and drones) are known to cause disturbance in sensitive areas for this wide range of species. In this talk, Amerson approaches drone stewardship through best available science and outreach to protect marine wildlife. Alicia Amerson is a marine biologist, science communicator, adjunct professor, and entrepreneur. She works to protect global biodiversity and empower communities through technology, science, and art. She is the founder of Alimosphere, a small woman-owned business focused on reducing disturbance to wildlife caused by drones while promoting the use of drones for conservation research. Growing up in New Mexico, Amerson was fascinated with the ocean and through her current efforts she is establishing a culture for flying drones responsibly around wildlife. Growing up she rode horses everyday and found as many books as possible to read about marine wildlife, their habitats, migration patterns, foraging preferences, and any other scientific fact that was known at the time.

She earned a BS in biology from Eastern New Mexico University. After graduation she worked on environmental remediation projects at Los Alamos National Laboratory where she gained over 10,000 hours of project management experience and earned her PMP certificate. In 2015 she completed her Master’s degree in marine biodiversity and conservation from Scripps Institution of Oceanography (SIO). At SIO she focused on whale-watching tourism and the use of guidelines or regulations in the industry along the entire Pacific coast in Canada, the U.S. and Mexico. Prior to her drone startup, Alimosphere, she was the first California Sea Grant fellow to work for Lieutenant Governor Gavin Newsom. Now she works exclusively on protecting wildlife from anthropogenic impacts by using the best available science, creating educational opportunities for people, and exploring applications to use drones for social innovation to benefit the whales and humanity.  Alicia is a past ACS San Francisco Bay Chapter research grant awardee.