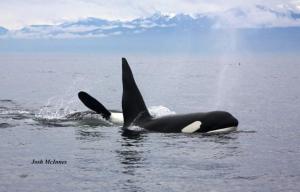 In the eastern North Pacific, three ecotypes of killer whale have been identified: resident, transient, and offshore. Transient killer whales are apex predators that specialize in foraging for marine mammals. This specialization shapes all aspects of their ecology, from foraging and acoustics, to social structure and genetics! Transient killer whales are distributed from Southern California to the Bering Sea, with many sub-populations being socially and geographically distinct.

With changes in ocean ecosystems during recent years, there has been an increased interest in understanding how transient killer whales affect prey both directly and indirectly.

Josh McInnes is a Canadian ecologist who grew up on Vancouver Island British Columbia, Canada. He studied marine biology and ecology with a focus in marine mammals, food web, and community dynamics at the University of Victoria.

Over the past decade Josh has traveled to remote locations off British Columbia, Washington, Alaska, California, Australia, Antarctica and South Africa to study killer whale populations. He currently lives in Victoria, British Columbia and is a seasonal resident of the Monterey Bay region of California.

For the last three years Josh has been studying the ecology of toothed cetaceans in Monterey Bay, as the research coordinator at Marine Life Studies. Josh is also a member of the North Indian Ocean Killer Whale Alliance, a lead researcher at Killer Whales Australia, a biologist and naturalist for Linblad Expeditions, and a scientific advisor at Ocean Sanctuaries in San Diego.