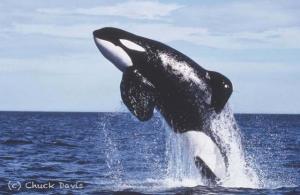 The project to return the Free Willy whale, Keiko, to his birth waters near Iceland emanated from thousands of letters sent by children demanding that the star of Free Willy be set free. Charles will share his experience of four years managing that project in Vestmannaeyjar Iceland and discuss how the knowledge gained from Keiko informs the work of the Whale Sanctuary Project.

A member of the Whale Sanctuary Project Board of Directors since mid-2016, Charles brings a unique blend of leadership and experience to his role as Executive Director. With a solid background in business that includes extensive experience in ocean policy, environmental policy, project management and government relations, Charles is no stranger to ambitious, visionary, ocean-related projects.

Mr. Vinick previously worked for the Cousteau family for over 25 years managing their ocean-related activities with positions as Executive Vice President and Chief Operating Officer of Ocean Futures Society, Vice President of the Cousteau Society, and Fonde de Pouvoir of Parc Oceanique Cousteau in Paris, France. His experience has afforded him the privilege of being in the wild with whales, including in his capacity as director of the program to return Keiko (the Free Willy whale) to the wild, as well as in his role as producer of Cousteau films.

Locally, in Santa Barbara California, Charles has also served as CEO of the Santa Barbara City College Foundation and is a founding Board member of Heal the Ocean. He has received commendations from the White House for his work with youth education and from the Los Angeles City Council for community environmentalism. Charles currently also serves on the Board of Directors of Heal the Ocean and Ocean Futures Society.