Back to top
Home | Calendar | When Whales Win, Everyone Wins: How a Whale Study in Mexico Transformed a Community, Katherina Audley - American Cetacean Society

When Whales Win, Everyone Wins: How a Whale Study in Mexico Transformed a Community, Katherina Audley - American Cetacean Society 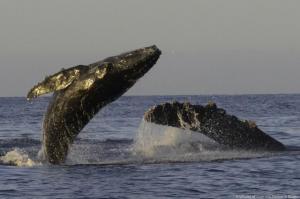 Barra de Potosí in Southwest Mexico is a little-known jewel, and it’s at a tipping point. Humpback whales breed there every winter, and resident dolphins delight visitors, but before Katherina Audley arrived, fishing was almost the only local industry and it was on the verge of collapse due to fishery decline. For the past six years, Audley and her organization, Whales of Guerrero Research Project, have been working to improve the local economy in a cetacean-friendly way through cooperative research, ecotourism, and community-driven conservation.

Whales of Guerrero Research Project has been conducting collaborative whale and dolphin research in Barra de Potosí since 2013. With local fisheries on the verge of collapse, the organization has worked with local communities to form ecotourism cooperatives providing a new way to make a living.  They have trained 75 boat owners from across the region in whale-safe boating, and their environmental education programs have reached 3500+ children in 25 schools.

Over these past six years, Whales of Guerrero Research Project has worked to transform the relationship between people and nature in this special part of the world. The seeds of stewardship have taken root in Barra de Potosí, and now they are beginning to bear fruit: ecotourism has brought 2.5 million USD into the community and the tourism cooperative now outnumbers the fishing cooperative; there isn’t a child in the village who can’t sing like a humpback whale; women are selling nature-themed handicrafts with great success at a new annual village art fair and beyond; fishermen have become incredibly talented and committed whale watch guides who take care and work together beautifully around whales and dolphins.

Come learn about the 16 species of marine mammals identified so far in this region. Hear about this special village in Mexico where all the resident kids know their local whales by name and how a community of fishermen became committed whale protectors. Katherina will also share her top tips on how to empower and inspire communities to become marine conservationists with the lessons learned along the way.

This event is open to the public. Admission is free.  Registration is recommended as we expect a high level of interest!  We’ll reserve seats for Eventbrite registrants. Donations are encouraged, $10 general, $5 students. Donations support education programs that build appreciation for whales, dolphins, and porpoises, and research grants which help the next generation of marine scientists deepen understanding of threats to cetaceans and find solutions to protect and conserve them. SAVE MY SEAT

Katherina Audley is founder and director of the Whales of Guerrero Research Project, a community-driven research, education and training program based in Southwest Mexico. She has participated in whale research and community organization projects around the world since 1997, and learned how to inspire the public to engage more deeply with nature and the world around them while working at San Francisco's Exploratorium in the 1990's.

A writer, photographer and communications professional since 1995, Katherina has been visiting, living and working in the 600-person fishing village of Barra de Potosí for more than 18 years. She earned the trust and generated notable interest from the community in establishing long-term monitoring and responsible marine management measures as a result of her success in increasing ecotourism-related work opportunities and teaching 1300+ local youth each year about marine mammals and the importance of marine biodiversity. Her program’s collaborative approach to conservation has been showcased by the UN as a replicable strategy for successful marine conservation.

Katherina is a National Geographic Explorer and guest contributor to National Geographic’s Ocean Voices column. She also serves as Information and Technology Manager for the Society of Marine Mammalogy, sits on their Social Media Committee and advises the Board on communication and technology strategy. She also provides advice on communication strategy to the International Committee for Marine Mammal Protected Areas and the IUCN Marine Mammal Protected Area Task Force.