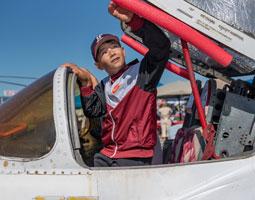 Open Cockpit weekends at the Pacific Coast Air Museum are a great activity for kids and family. We raise the canopies and open the doors to give you an unobstructed view inside a genuine fighter plane, attack plane, transport, or helicopter.

Look inside this vintage aircraft, and learn about its history from the crew who has lovingly restored it.

The DC-6 was a large and powerful piston-powered airliner. In its day, the DC-6 circled the globe delivering passengers to North America, South America, Europe, Africa, Asia, and all spots in between. When it was replaced by jetliners in the larger airlines, the DC-6 carried on with smaller and regional airlines. Many served as military transports, and later several were converted into aerial tankers for fighting fires.

You can even sit inside some of our planes and see what it was like to be the pilot or crew! On some planes, the controls are still hooked up to the control surfaces. So if you move the stick or wheel, you can see the ailerons or elevator move! It’s a great way to learn about how a plane is controlled.